Pastor Carol Ripley-Moffitt served as temporary pastor during two different periods 20 years apart. During 2000-2002 she served as "interim" pastor prior to the long term service of Pastor Steve Halsted who arrived in 2002. And then for almost a year during 2019-2020, Pastor Carol served with Tony Hoshaw as "bridge" pastor during yet another transitional period. Her final sermon was delivered on April 19, 2020 as part of a "virtual worship service" during the COVID-19 pandemic that hit in March 2020. Following is the text of that sermon ...

Link to printable copy of sermon 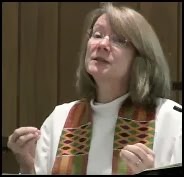 When it was evening on that day, the first day of the week, and the doors of the house where the disciples had met were locked for fear of the Judeans, Jesus came and stood among them and said, "Peace be with you." After he said this, he showed them his hands and his side. Then the disciples rejoiced when they saw the Lord.

But Thomas (who was called the Twin), one of the twelve, was not with them when Jesus came. So the other disciples told him, "We have seen the Lord." But he said to them, "Unless I see the mark of the nails in his hands, and put my finger in the mark of the nails and my hand in his side, I will not believe."


A week later his disciples were again in the house, and Thomas was with them. Although the doors were shut, Jesus came and stood among them and said, "Peace be with you."

Then he said to Thomas, "Put your finger here and see my hands. Reach out your hand and put it in my side. Do not doubt but believe."

Thomas answered him, "My Lord and my God!" Jesus said to him, "Have you believed because you have seen me? Blessed are those who have not seen and yet have come to believe."

Now Jesus did many other signs in the presence of his disciples, which are not written in this book. But these are written so that you may come to believe that Jesus is the Messiah, the Son of God, and that through believing you may have life in his name.

Peace be with You

Fear and great joy—the response we heard last week of the women leaving the empty tomb after hearing the angel’s message that Jesus was raised—echoes in Jesus’ appearance to the gathered disciples that very evening.  Only this time the fear is not from an encounter with an angel, fear is from outside forces and inside insecurities. This band of followers who had scattered in fear on the eve of the crucifixion have now gathered in fear to console one another. They are huddled behind locked doors, sorting out events of the past few days. Jesus’ death has barely had time to sink in. Will the authorities now come after his followers, will Jesus’ fate also be theirs? How do they begin to think about life without their teacher? Will they go back to normal, their pre-Jesus lives? Or is there no going back, and if so, what does that look like?  They are not yet ready to believe Mary Magdalene’s message that she has seen Jesus. Even if what she said were true, their joy at the news would be tempered by a different kind of fear: how could they face him, knowing they deserted him in his hour of need, and denied even knowing him?  Could they stand to see his disappointment and would he condemn them as failures?

And into their midst, Jesus comes bearing Shalom, Peace be with you. And his sudden appearance must have increased their fear—he shows them the marks of his crucifixion, so that they rejoice in recognizing him. “Yet why does Jesus say again “Peace be with you?”  Isn’t it because what they really need the most at that moment is forgiveness? Isn’t the kind of peace they need the one set in motion by forgiveness?” (James Alison)  For Jesus’ appearances following resurrection are not so much to prove that he is raised; they are to continue the disciples training in following him.  And his peace, his commission to them, while challenging their fear, also is a sign of his forgiveness. Yes he knew their desertion and denial, but he also saw their belovedness, their potential to live out of new life and new birth.  Frederick Buechner writes “All his life long, wherever Jesus looked, he saw the world not in terms simply of its brokenness, but in terms of the ultimate mystery of God’s presence buried in it like a treasure hidden in a field. To see the world like that, as Jesus saw it, is to be whole. And sometimes I believe that even people like you and me see it like that.”

Jesus could see beyond the brokenness of disciples’ lives that manifested in their fear, and see that treasured presence of God. He claimed wholeness for them by offering peace instead of revenge, by sharing power of Spirit rather than by judging them unworthy. And he entrusted them to continue his ministry of offering forgiveness to others. He penetrates their immobilization and isolation and sends them out into the world. It was this wholeness which he died to give them, and which gave these early disciples ability to go out and proclaim the power of God to bring life even at threat to their own lives.

But there is one of them who is not there—Thomas, and he refuses to believe unless he sees. So the next week when Thomas is gathered with the disciples, Jesus comes again, offering peace.  This peace affirms the doubt and the questions that are part of any authentic faith. As with us, the disciples represent the many ways that we as humans learn and grow and come to understand who we are, our place in the world, our purpose for being. He is the pragmatist among the disciples. Thomas will do the right thing, but he needs the empirical evidence.  Barbara Brown Taylor notes the irony that “after all the talk in the Gospel of John about seeing and believing, our generation is asked to "hear and believe." And yet, she continues,  “an ever greater irony is that, in every generation, we do perceive, in ways both marvelous and wonderful, the risen Jesus alive in this world. In many dramatic ways in the life of the church, we witness resurrection and experience new life, "see and hear and touch" the Risen Jesus, the Body of Christ alive and in love with this beautiful world.”

So what kind of peace do we need from the Risen Christ today?

Some of us may need the peace of Christ’s presence, as one who was wounded and knows our suffering and our sorrow.  We need reassurance during times of loss and change and transition.
Some of may need the peace of Christ’s forgiveness, allowing us to accept our brokenness, and to see in it the ability of God to create and re-create new hearts within us.

Some of us may need the peace of Christ’s challenge to be his body in the world, showing our own wounds to those who like Thomas need to see that there is a way to live that does not rely on violence or greed or self-servicing power but relies on the self-giving, transformational love that brings life and light to all.

It seem ages ago now, but just last fall, after reading the novel, “The Overstory,” I was paralyzed by fear of what was happening with our environment, that no matter what actions we took, it was too late for us as humans because of our abuse of the planet. We were seeing a ray of hope in the leadership of young people like Greta Thunberg in urging action on climate change. Isn’t it interesting how this new threat of coronavirus has overshadowed that, or seemed to put it on the back burner? Yet as we celebrate the 50th anniversary of Earth Day this week, it is a reminder during this season of Easter and (for our part of the world) the arrival of spring, that we are in need of Christ’s peace: to calm our fears, call us out of our guilt and paralysis, to forgive our abuse of creation by setting us free to act with courage in healing the earth.  And as difficult as this shelter in place and physical distancing have been, as horrific as the loss of life and, for many, loss of livelihood is, it has forced us to give our planet a rest from carbon emissions of at least some of our transportation and production. It has forced us to examine our priorities and our commitments, especially as we see the economic and racial disparities that are brought into stark focus. It is offering us a chance to be raised to new life.  In some ways it is giving us a chance to repair the breach.

The question beyond what kind of peace we need from the risen Christ becomes:  “What kind of peace does the world need from the body of Christ, from the present-day followers of Jesus?” How will we be present in the midst of fear? How will we extend forgiveness so that all know their own belovedness? How will we point to God’s presence in both brokenness and wholeness? How will we encourage and challenge others to participate the new thing that Spirit is creating? These are the questions we live out in communities like this one at the corner of Dixie Trail and Wade Avenue. The  answers are not always easy to discern or to live. You will continue to live these out, in a few weeks joined by Lacey Brown as your next guide and teacher and pastor. She will not have all the answers, just as none of your previous pastors have had, but she is eager and excited to join you in living the questions.  Tony and I have been privileged to share this little part of the journey with you. As we make this transition, and as we as a world make an even bigger transition into some now unknown reality, let us be reminders to one another that the Holy One still comes among us offering peace to all who see and hear and touch (just not yet!) and believe. Amen