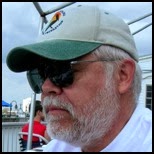 A reflection by Lavon Page based on an incident that occurred in the summer of 1965. The setting is Birmingham, Alabama (more specifically the suburb of Fairfield). It was during George Wallace's first term as Governor of Alabama, and while Lavon was teaching at Miles College in Birmingham. (Miles College was where Joan Baez recorded her live version of "We Shall Overcome" which appeared on her second album in the early 1960s.) This reflection was recorded in the summer of 2006.