This is a video of the Youth Sunday program presented on April 22, 2018, by the Community UCC Youth Group. The program was created by the youth under the direction of Youth Education Coordinator Śānti Matthews, and filmed by Lavon Page at Śānti's request.

The video clips shown in this post are excerpts from the worship service presented by the youth of the church on April 22, 2018. The entire service on video is also available in a separate post. The program was planned and directed by the youth and Śānti Matthews, the Youth Education Coordinator. The video was made by Lavon Page at Śānti's request. 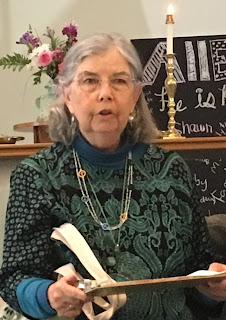 Lib Hutchby
Lib Hutchby is a teacher of conflict resolution and nonviolent resistance.  Whether she is singing with the Raging Grannies at movement gatherings around the state, being arrested for justice (four times so far), or telling stories, she prepares us and leads us in the work at hand.

Lib worked alongside Carolyn King in the integration of the state's parks in the 1960s through the United Church Camp held at Umstead Park.  She was the first white teacher at Jefferys Grove Elementary School, teaching fourth grade as Wake County's public schools integrated.  Her thesis for her master's degree on conflict resolution was on nonviolence in children's literature.  Lib put that training to use when she was called on to help counsel and mediate following the killings of the Greensboro Five.  Lib and Carolyn again connected as overnight volunteers in the early days of the Ark Shelter for men (now the Helen Wright Center serving homeless women).  In 1989 she began volunteering to resettle refugees and eventually worked for ten years on staff with Lutheran Family Services.


Currently Lib's work has turned to caring for creation and ensuring that it will be healthy and justice for the next generations.  Whether she is singing with the Raging Grannies or volunteering with Frack Free NC, Clean Water for NC, or 350.org - Triangle, Lib is an advocate for the earth.  Lib is a member of Pullen Memorial Baptist Church and active in their Care of Creation group.

You can support Lib by sitting in the gallery during her April 24 hearing.  She was arrested at a sit-in outside Governor Cooper's office protesting the Atlantic Coast Pipeline (see Lib holding the sign in the video of the Raging Grannies).

John and Adrienne Little
The Littles exemplify the virtue of showing up when justice work is needed.  Both are life-long educators (John as a professor of history at St. Augustine's University; Adrienne teaching grade school to children in low-wealth schools in Raleigh, the NC mountains, and Guam).  At Loaves and Fishes they continue this work as tutor volunteers and have built a close relationship with the entire family who have become an important part of their lives.  Adrienne has opened her home to refugees and served as "mother and grandmother" to children and adults in a new land.  She has recently been a fixture at the NC General Assembly, joining other activists in successfully advocating for criminal justice reforms.  John is has sought to live out his commitment to racial justice, especially in the educational sphere.  They are diligent advocates for stewardship of God's creation, for economic justice, and for a world without violence - whether from wars or from gun violence.  At Cy King's last attendance of HKonJ, John navigated Cy's wheelchair in the crowds during the March. Community UCC is glad that they have been long-time members of the congregation and leaders in the Social Justice Ministry and Economic Justice Task Force of our church.  John chaired the Social Justice Ministry for several years, overlapping with Cy's time on SJM.

John Paar
Dr. John Paar, longtime Raleigh resident, cardiologist and person of faith, has been a key figure in the Raleigh peace and justice network since the 1980’s.

John’s life-long commitment has been to use his expertise as a cardiologist to improve medical care for those who lack access.
And his work is characterized by the personal connections he makes with colleagues and with patients, working with compassion and respect.

In Raleigh John has been an advocate for affordable medical care for the poor of Wake County, and in his roles at Wake Med. Recognizing that family members of those from out of town being treated for severe heart ailments incurred great expense while staying with their loved ones, John was an early supporter of Samaritan Inn, a Lutheran project to provide free lodging for those family members. He was a charter doctor at the Urban Ministries Open Door Clinic. His medical work with those living on low incomes led him to be a key figure in starting Raleigh’s first shelter for homeless families at what is now called Families Together. During the 1980s Overground Railroad effort to assist Central American refugees in moving through the US to asylum in Canada, John provided
shelter and support, including medical aid when needed, for refugees coming through Raleigh.

In Nicaragua John went to Nicaragua in the 80’s as part of Witness for Peace to stand between the
Contras and the Nicaraguan army to prevent killing. Viewing the experience through the eyes of a physician, he started Project Health for Leon (PHL) with Dr. John Rose. This organization seeks to improve the options for cardiac care at the hospital in Leon by sending experts from the US to teach and treat and by bringing Nicaraguan medical practitioners to the US to further their studies.

Throughout his life, John’s work has been nourished by his deep faith and the call it places on him to act for justice.

Carolyn and Cy King were members of the congregation who were noted for their service to bettering the Raleigh community, the state of North Carolina, and the nation.  They were inducted into the Raleigh City Hall of Fame in 2009.  Listen to an interview with the Kings full of stories about their justice work and their life together.

The award was created in their honor in 2012 and celebrates people who exemplify a similar gracious spirit in their work for justice.  You can read about past recipients here.